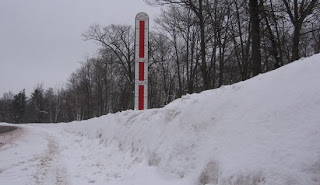 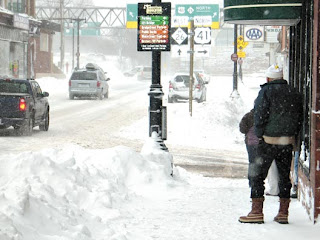 It wouldn't be the U.P of Michigan if it wasn't for the big lake effect snowfalls during the winter.
The amounts vary from year to year from the legends of 1978-79 with 390" to last year's low amounts in the 100" range.
When you think winter in the U.P snow is the first thing on the mind. Houghton got 8 inches and Calumet up the road got 15" of snow. I find that it never seems to bother Yoopers much at all. Matter of fact some are upset if there isn't big snowfall. Snow means winter sports and winter visitors. The Keweenaw Mountain Lodge is now open all season in Copper Harbor. They have X-Country trails and sledding. A nice large fireplace in the dining room. I wish I was there right now. The famous snow gauge is on HWY 41 on the way to Copper Harbor just south of Phoenix.
Phoenix is very small, a nice old white church, general store and a rock shop. I think the general store is still open? I don't know where else the people of Eagle Harbor get their milk? These are mysteries of the Keweenaw. Where do people shop? Do they really drive in the deep snow all the way to Houghton or Calumet for groceries? Of course they do! They are tough folks and have 4WD vehicles. In some Southern Wisconsin cities 3" of snow and a threat of more causes a early release of school classes! That is child's play in Upper Michigan. They call that a dusting........

Not all of the Yoopers have 4WDs. There is good snow removal on the major highways which makes it fairly easy to get around once you get out to the road.

What I find interesting is the elevated walkways out to the street in Calumet and other areas of the Keweenaw.