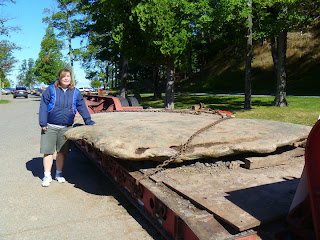 HOUGHTON COUNTY -- The world’s largest piece of glacial float copper will soon be on display in Presque Isle Park, thanks to the vision of the late Upper Peninsula historian and educator, Fred Rydholm. Weighing more than 40 tons, the natural copper slab is approximately 15 feet in diameter and several feet thick. Float copper is naturally formed and has been carried or "floated" along by the last glacier. The massive piece of copper was discovered in 1997 on private property near Hancock. Rydholm, who was a founding member of the Ancient Artifact Preservation Society (AAPS), asked the Superior Watershed Partnership (SWP) to assist them in saving the copper from being melted down for industrial use.

Thanks to the City of Marquette, the world’s largest piece of copper will now be on display in Presque Isle Park. It’s interesting to note that in 1843, surveyors recorded veins of copper and silver at Presque Isle. Marquette was also an important shipping hub for the growing copper and iron industries. The famous Ontonagon Copper Boulder that is now housed in the Smithsonian Museum weighs in at less than two tons.

"This is really a labor of love in honor of Fred. Sharing the copper was his dream, and it’s just great to see all of these people pitching in to help make his dream come true," said Carl Lindquist of the SWP. A number of regional companies have donated their services to help with moving and displaying the 80,000 pound specimen. Companies include, but are not limited to, Lindberg and Sons, Oberstar Excavating, Nagelkirk Landscaping, Tri-Media Engineering, Gary Moyle Contracting, Holli Forest Products, Cook Sign, and the Ford Motor Company. The Ford Motor Company history division will be filming the copper move as part of an upcoming documentary about Upper Peninsula copper. The SWP is also assisting the AAPS with a community capital campaign to complete the purchase of the copper. Individuals, businesses, or corporations that are interested in helping to preserve this unique piece of Upper Peninsula natural history can contact the Superior Watershed Partnership at (906) 228-6095.
No comments: 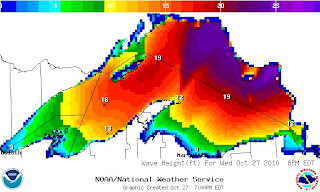 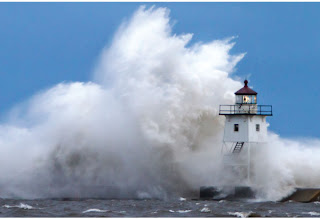 And the big lake is KING! Look at those wave heights on the NOAA map! There wasn't a ship on the lake last night when I checked the real time ship tracking.
No comments: 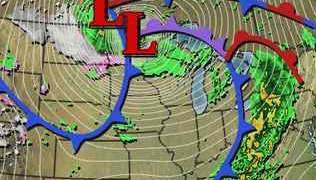 Biggest storm tonight since the night of the Edmund Fitzgerald Storm in 1975. It's a monster low pressure complex. These storms just don't happen very often but when they do you don't want to be on the Great Lakes.
http://cimss.ssec.wisc.edu/model/cras61_EF/cras61_EF.html

10/26 - Chicago, Ill. - A storm stronger than the one that sank the freighter Edmund Fitzgerald in 1975 is expected to slash across the Midwest Tuesday whipping waves as high as 27 feet.

A line of severe thunderstorms driving wind gusts of 50 miles (80 kilometers) per hour will arrive in Chicago before 10 a.m., said Andrew Krein, a National Weather Service meteorologist in Romeoville, Illinois.

The storm will be a cyclone, with projected central pressure, a measure of its strength, forecast to be 28.35 inches. That would make it the second most severe system to strike the Great Lakes, according to the weather service.

The pressure at Duluth Tuesday bottomed out at 28.35 about 11:30 a.m. On vessel on lower Lake Michigan reported a wind gust of 108 Mph and pressure was reported at 28.33.

In comparison, when Hurricane Earl reached Category 3 strength in the Atlantic at the end of August, its central pressure was recorded at 28.20 inches.

Great Lakes cyclones aren’t like hurricanes, however, Krein said. The storms gather their energy from the Jet Stream and the upper atmosphere, while hurricanes draw their power from warm ocean waters and have the strongest winds wound tightly around the core.

Krein said the storm also isn’t likely to produce a lot of rain. Aside from the heavy thunderstorms that arrive with the first blast of wind, the weather will be drier and breaks may appear in the clouds.

The blue sky shouldn’t deceive anyone, he said. The storm will last at least two days and will cause a problem for ships. 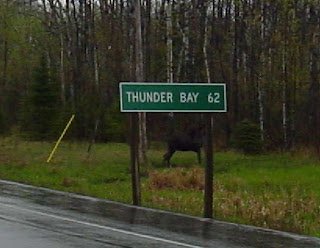 It was Moose Madness this weekend in Grand Marais. Wish I was there. A fellow blogger is talking about if Moose could vote. So I thought it was fitting that I posted my Moose picture.It's not a good picture as she was trotting for the bush. She snorted and was annoyed that I had bothered her as she was grazing in the ditch area. We were returning from Thunder Bay Ont.
as you can see on the sign. She wasn't the biggest cow you could see but I'd not want to mess with a Moose. Or hit one with a car for that matter. We had just commented how we would never see one. Then of course you do.
No comments: 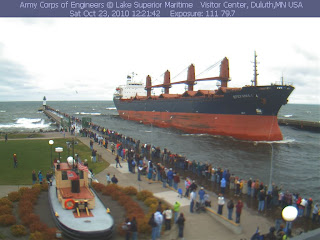 Don't like the weather, just wait a day. The wind coming out of the Northeast today and it's chilly. But it doesn't stop the boat watchers down at Canal Park. Even in 48 degrees and a brisk wind they come out in number to see the big ships. The live cam at the Marine Museum is really nice. You check arrivals on the Duluthshipping news and go to the cam. You can be a boat nerd
and watch no matter where you are presently.
No comments: 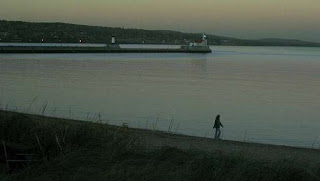 This weather won't last forever of course. I believe we are all aware of that fact. I see many people today doing alot of walking and enjoying the lovely day. October has been wonderful to say the least. I can't recall a better October at all. So warm and sunny. Looks to be a chance of rain and a change coming in the weather this weekend. 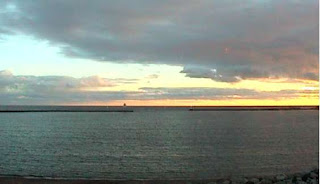 Really nice shot tonight on the Grand Marais live cam.
I was just there a week ago but still visiting via the Internet.
No comments: 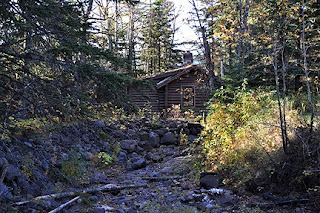 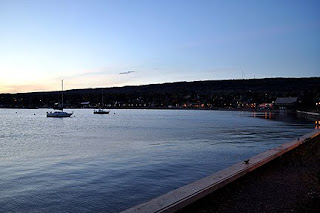 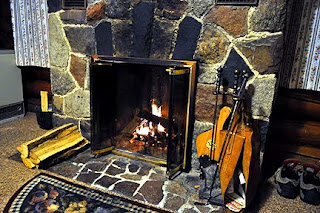 The leaves went fast this year but there was still some color to be seen in areas. The weather has been fantastic this fall with warmer then average temperatures and clear skies. Perfect for touring around the North land. And after a nice meal you watch the twilight at Grand Marais harbor and go make a fire in a historic cabin. You can stay in one of the newer condo resorts with all the extras but it won't give you that real feeling of the North shore. The cabin was built in 1922 and has been restored very nicely. It should last for years to come. As you can see the stream that runs past the cabin was almost dry. The Arrowhead region has a drought. Perhaps they will get some heavy snows this winter that will also keep the cross country trails open
and Lutsen Ski Resort busy. Grand Marais is a wonderful small town with about anything you could want. Plenty of good places to eat,shop and be entertained.
No comments: 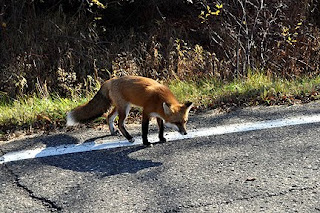 While enjoying fall colors in the Boundary Waters a fox came right at the car. He had apparently done this all summer to tourists and knew he would get a treat. He had next to no fear at all.
He got a nice pretzel that was honey flavored which I'm sure was a real enjoyment to him. What could be better? I have no idea what a mouse or rodent tastes like? But he really likes the handouts better judging by the way he rushed the car. 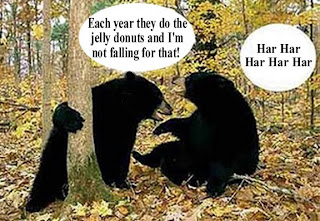 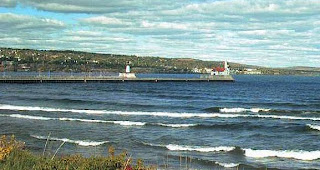 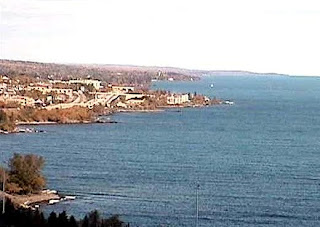 I’m not sure what it is about a place that resonates within a person.
The big lake that reminds us that everything is small in comparison. The Saw tooth mountain ridge with views and hawks flying south in the fall. The endless scenery on the drive north to Canada. Being around like minded people that seem to think correctly in a ever changing crazy world. The awareness of the seasons and weather that you don’t get in a city setting. The timeless feeling that a wild area gives you when you understand your only here for a tiny period of time and that rock your standing on is millions of years old basalt. I’m sure it’s a combination of everything stated above. Our daily concerns are really nothing. The big upset at work or home is nothing but a minor hiccup in time. Get in the car and drive up the North shore and see the colors and feel the crisp clean air. Yes I’m more then ready for a drive to the border and back this coming week. Photos are provided thankfully by the local live cams which provide wonderful views while your at the desk doing the daily grind on the computer.
3 comments: