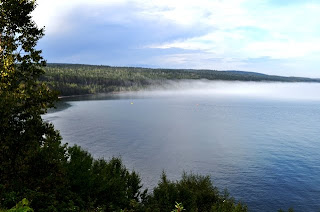 Good Harbor Bay Minnesota just south of Grand Marais. This has been the summer of the North shore for me. Several trips up and down the shore. And there is still more to explore. You will never run out of places to visit between Duluth and Grand Portage. The fog was on the bay making it interesting. Rock hunters like the shores in this area. Thomsonite is one sought after rock. Agates another of course. I've never found either. I cheat and find them at the Beaver Bay rock shop. 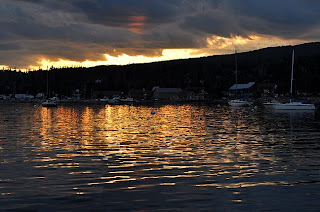 Practice the art of doing nothing is a vacation phrase I heard recently on a ad. It really seems to apply on the North Shore. Grab a ice cream sundae and just sit for awhile. You don't have to be busy all the time. You might see a nice sunset.

Just before the Canadian Border on HWY 61 is the Pigeon River and the High Falls. Matter of fact the river is the border. The Visitor center there has been remodeled and the trails to the falls upgraded. It's a very easy walk to the falls and the viewing pods as they call them in Canada. For more information click on the link below the picture. 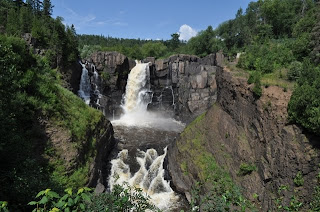 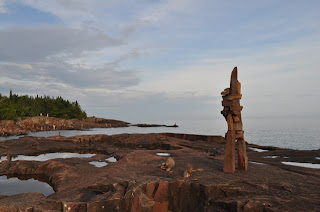 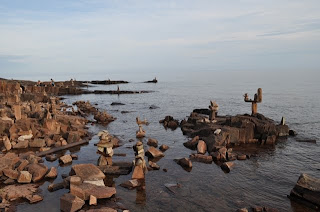 The Inuit used Inuksuks to make their way in the barren tundra. With no real landmarks it was the only way to find the path. Each August these seem to appear in great numbers on Artist Point at Grand Marais Mn.. They are always there in few but with the increase in vacationers they just explode in numbers on the point. It’s a wonderful treat and really entertaining to see who has made what and how elaborate. Perhaps they are marking the way to a excellent vacation holiday for families in Grand Marais. I don’t know of many better spots with the variety of things to do. 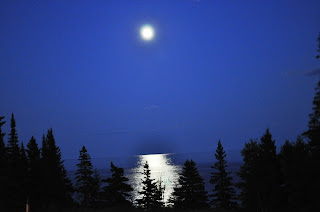 A full August moon on the North Shore of Minnesota. Weather was clear and cool at night.
Perfect for moon viewing. This is the view from the cabin near Lutsen. What would be better in the evening? I typed in August Moon on Google and it came up with hundreds of Chinese restaurants and a few old songs. But to my surprise the moon in August is called the Sturgeon Moon. I would have never guessed that one. Next August 2012 we will have two full moons in August. The second is always called the Blue Moon. 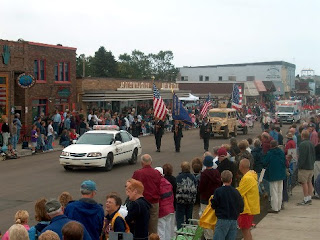 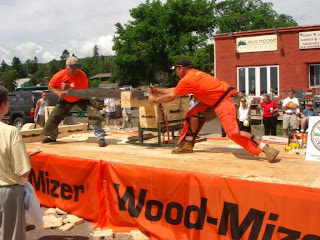 Exciting events, food stands and a nice Parade on Sunday afternoon. This is the Fisherman's Picnic at Grand Marais. And of course you have to eat a Fish Burger at the stand. They sell hundreds of them over the three day event. The wood cutting events are the best to watch.
No comments: 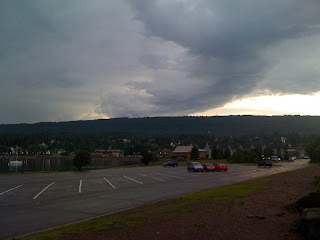 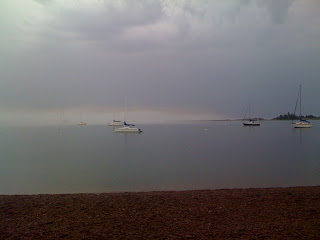 One minute it's a bit rainy, then foggy and then clear again. Last night the Northern Lights were just the best in years but I missed it. Click the link below for information on the Auroras. 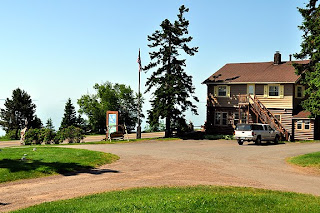 Another summer holiday at the Cascade Lodge again this summer! I feel lucky as that was unplanned and there was a opening. The location between Lutsen and Grand Marais Minnesota is ideal. I really enjoy the fact the Lodge is in the Cascade River State Park and you can hike from your door to the waterfalls. Pictured is the Lodge and you can't tell the water from the sky as it was just a picture perfect day. You can also rent cabins if you don't want to stay in the lodge. I really like the cabins near Cascade Creek. The sound of rushing water is very nice at night. And the bottom picture is one of the waterfalls of the Cascade River in the park. It's only a short hike from the Lodge. Hike all morning, get real hungry and have lunch in the Lodge restaurant overlooking Lake Superior. In the wintertime they have groomed XC Ski trails if you enjoy the other seasons as well. 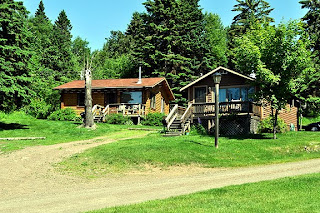 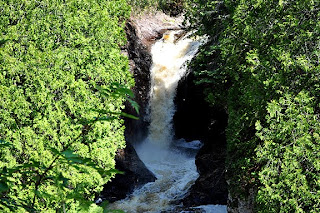 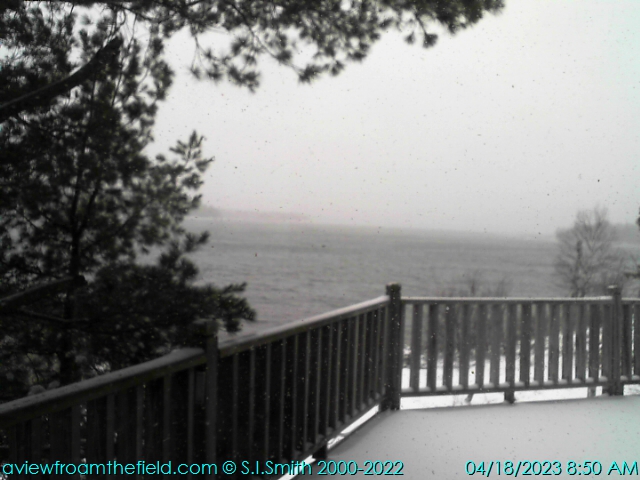